Sustainable Transition: Navigating the Arena through Junctions and Mediators: a case of ØsterGRO in the Klimakvarter of Copenhagen

Within the organic food production and consumption transition around Copenhagen and Denmark, a new project has joined the movement: ØsterGRO, an organic rooftop farm in Østerbro, Copenhagen. This post will discuss the concepts of junctions, mediators, and navigation within the theory of Arena of Development (AoD) and apply it to the case of ØsterGRO. A particular attention will be paid to actors and actor constellations and potential conflicts in the arena.  The theory is taken from two texts by sustainable transition researchers: Harbor bathing and the urban transition of water in Copenhagen: junctions, mediators, and urban navigations by Jensen, Hoffman, Lauridsen, & Fratini, as well as Creating Copenhagen’s Metro – on the role of protected spaces in arenas of development by Pineda and Jørgensen. After this presentation and application, the advantages and disadvantages of the theory will be discussed.

An arena of development is created “when a new discourse, claim, material arrangement, and set of institutions are established through a careful configuration of boundaries with other existing arenas.”[1] In this case, the arena is an urban design plan to bring climate adaptation to a neighborhood in Østerbro in Copenhagen.

Before analyzing ØsterGRO, it is necessary to provide context to the greater project that the roof top farm is a part of.  The Klimakvarter is a neighborhood area in Skt. Kjelds Kvarter in Østerbro in Copenhagen, that has been funded and dedicated to developing urban design that will promote climate adaptation, and is set to become Copenhagen’s first climate resilient neighborhood. 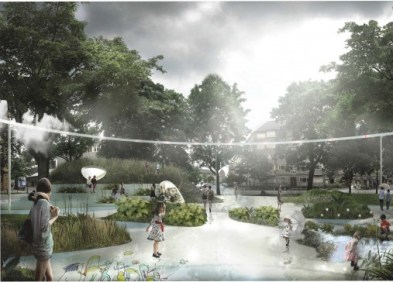 a rendering of the planned urban design of a square in the climate adaptation neighborhood of Copenhagen [2].

To align the case to the AoD theory, the Klimakvarter is a junction. A junction is an under configured space that does not optimize socio and material relationships and is a site where the urban fabric has come unstable.[3] Here urban fabric is defined as urban fabric is conceptualized as: “the complex interplay among interdependent yet partly autonomous socio-material assemblages characterized by ambiguous and sometimes conflict-ridden relationships and interdependencies.”[4] This instability has been caused by changes in climate that result in destructive weather patterns.

This neighborhood’s redesigns are made with a special focus on dealing with cloud bursts, an issue that is becoming increasingly prevalent in Copenhagen. Below see video footage from a cloudburst in 2011, which visualizes the issue these weather patterns create.[5]

The Klimakvarter project aims to add ‘blue and green elements’ to the urban space in order to make the city resilient to higher rain and sea levels, warmer weather, and other climate change threats, while at the same time adding to livability and quality of life for residents.

The plan for the Klimakvarter, including a description of its projects, can be found here.[6]

The rooftop farm ØsterGRO is a project within the Klimakvarter. To align it with the AoD theory, it is then a mediator because it is an initiative acting to produce a change in the conflict of the junction. Jensen, Hoffman, Lauridsen and Fratini define a mediator as “a local project or intervention that proves instrumental in positioning itself as a key node in a broader series of reconfigurations among the socio-material assemblages pertaining to one or several sociotechnical systems.”[7] The farm sets to reconfigure a portion of the neighborhood in multiple ways: physically through a transformed rooftop and socially through an engaged community. 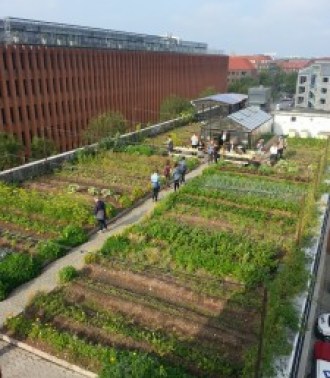 The concept of navigation can be defined as “the activities by which urban actors try to reconfigure new stable boundaries and relationships among socio-material assemblages that have been drawn into a ‘hot situation’ at a particular junction.”[8] The founders and project managers of ØsterGRO are three young landscape architects whose navigation of the development process can be divided into two phases: the preparation phase and the action phase.

During the preparation phase the young innovative developers conceptualized the idea, proposed it to the Klimakvarter and its decision-making committee, gained funding, found a space, and began the initial design process. These activities were all about interacting, scripting, and enrolling relevant human and non-human actors to the project. These actors and actor constellations will be presented in greater detail in the following section. A situational element that was necessary to finding during this phase was finding a site for the project. The founders secured the site on the rooftop of an old auto auction house. The building’s structure was reinforced to hold cars on the roof, therefore it was also a perfect fit for a roof top farm with large amounts of heavy soil, water, and plants. During this phase there is knowledge required of the developers such as project proposal and management, landscape design, as well as knowledge of farming and its physical requirements.

In the action phase the project managers began the work of developing the physical space. While the founders had the vision and design skills, they lacked farming knowledge and skills. For that reason, they sought help from farmers around the Copenhagen area to teach them and help in the beginning of the action phase. The following steps included gaining members, creating community, and growing and harvesting food and plants. After the initial portion of the action phase, the project began to grow and expand. This process lead to the an increase product range, such as the addition of a chicken coop and honey bees, as well as outreach to the extended community of Copenhagen through school activities and public tours, and additionally a newly opened public restaurant. During the action phase additional knowledge was required, some of it tacit which could only be learned through experience. This can include actor and conflict navigation. These conflicts can be caused by discrepancies and differences, as well as lacking of knowledge from particular actors. This will be discussed deeper in the following section. The AoD theory utilizes the Actor-Network Theory (ANT) and therefore the actors within the arena must be identified before further analysis can continue. It is important to note that when creating the arena of development, actor inclusion and exclusion is highly relevant and this consideration will have a significant impact on the final outcome of the arena.[9] The AoD theory also acknowledges that the outcome of the development process is impacted by external elements such as environment, technology, spaces and built elements, and infrastructure.[10] These elements are important to acknowledge when analyzing both the actor constellations and conflicts of the case.

The basic concept of the ØsterGRO project is that the farm produces food for a small co-operative made up by members of the local community. These members pay a sum at the beginning of the growing season and then receive a bag of food produced by the farm each week of the harvest season. These members are invited to help with the tasks of the farm on a recreational level. As mentioned above the project also reaches to the greater urban community of Copenhagen.

The actors in the case of ØsterGRO include: a picture of me taken during a visit to ØsterGRO during the Eat your City conference in September 2014.

The inclusion and exclusion of these actors is highly relevant because it impacts the outcome of the development of this project and arena. In this case Klimakvarter and its supporters were relevant in the preparation phase of the project, however they have been excluded from the action phase so that the control and development is up to the project managers independent from the input and opinions of their financial supporters. Within the organic and local food regime there are different actor constellations. An actor constellation is the arrangement or grouping of actors. Within this regime there can be different constellations such as: production, distribution, consumption, regulation, general supporting bodies. The impact of non-humans in each of these constellations is also relevant to note.

It is also interesting to think about situational conflicts, which could be either environmental, economic or spatial. A highly relevant conflict is the projects spatiality with the main issue at the moment is that the demand has outgrown the sites capacity. This issue could be solved by expanding the project to other areas, and perhaps creating a VesterGRO, NørreGRO, or roof top farms in any of the other neighborhoods of Copenhagen. This process of development would require many relevant subjects to sustainable design such as project management, organizational understanding, as well as upscaling of a niche within a transition movement. This conflict and solution mainly impacts the project managers of the ØsterGRO initiative as well as members of the local community who wish to become members or the cooperative or get involved in other ways. The municipality would also be required to get involved setting regulations for this project expansion to take off.

The flexibility concept of junctions is advantageous to its application and usage. While typically junction is defined as a physical site, this description can be stretch so that the concept can also be applied to non-physical spaces as well. For example, hypothetically the concept could be stretched and applied to an unconfigured thought process of consumers. If consumers only think about economic incentive when purchasing food, their thought process would be unconfigured if the price of conventional and organic products were the same. In this case, a mediator could be applied in the form of informative material in the shop to inform consumers of the many sustainable benefits of organic food, as well as the harms in conventional food production and consumption. This mediator could influence and enroll consumers into the organic food consumption transition.

There are also a few disadvantages to the navigational aspect of the mediators and junctions concepts. While the theory places significance in the navigation of junctions and conflicts, it does not offer insight as to how they should be navigated. Enrollment is mentioned as a step of navigation, however this is an elaborate and complex process that requires thoughtful and thorough evaluation and fulfillment. How this should be handled is left to the mediator without much guidance from the theory.

To conclude, the Arena of Development theory along with junctions, mediators, and navigation is relevant to apply to urban transitions and did provide me with an interesting frame to analyze the case of ØsterGRO in the Klimakvarter.

To find out more information, and to hear about events or activities at ØsterGRO, follow them on Facebook !